If you’re reading this post for instructions….you should check out my revised plans in a newer post found here; http://tommyandellie.com/?p=2582

This Dining Room Table has been a labor of love….so to speak. It’s been fun to try out new tools and new techniques and I’ve learned a ton for the next time around. This has really felt like the first time building something this substantial from the ground up. Here’s how it all started.

I recently came across this blog, ana-white.com. It’s an amazing resource for do-it-yourself builders with great detailed building plans. So far, I’ve used a couple plans for inspiration and techniques but have yet to follow one to a “t.” This is the plan that lead to motivating me to build the table; http://ana-white.com/2009/12/plans-farmhouse-table-knock-off-of.html. I also went to Restoration Hardware and checked out the table with my own eyes. I noticed a couple of crucial differences between the Ana-White plan and the actual Restoration Hardware table that I wanted to implement. The Restoration Hardware table used big wide planks for the tabletop (so I used 4-2x12’s for the top), they also had big beefy table legs and cross beam (so I used 4x4’s), and I also really liked that they had two 15” extensions that could be added on (so I included that in my design).

The big problem with wanting to use 4x4’s for the legs is that nobody really sells 4x4’s unless they are pressure treated. So I had to purchase a majority of the wood from a local mill, Siewers Lumber, which meant that it cost more than just using framing 2x4’s.

The first thing that I did was cut the 2x12’s, 2x8’s (for the breadboards), and 4x4’s to length. I then notched the 4x4’s out. To notch it out, I used my table saw. I set the blade to the height that I wanted and then made the first cut and the last cut. I then made subsequent cuts in between, hammered out the little slivers, and then swerved the 4x4’s around on the table saw to smooth it all out. I strategically left about a 1/4” for the 4x4’s to still out just enough to give it some definition. I did the same for the 2×4 that was the stretcher along the bottom. Once I did this, it created a really strong foundation that would hold together by itself. This is what it looked like. 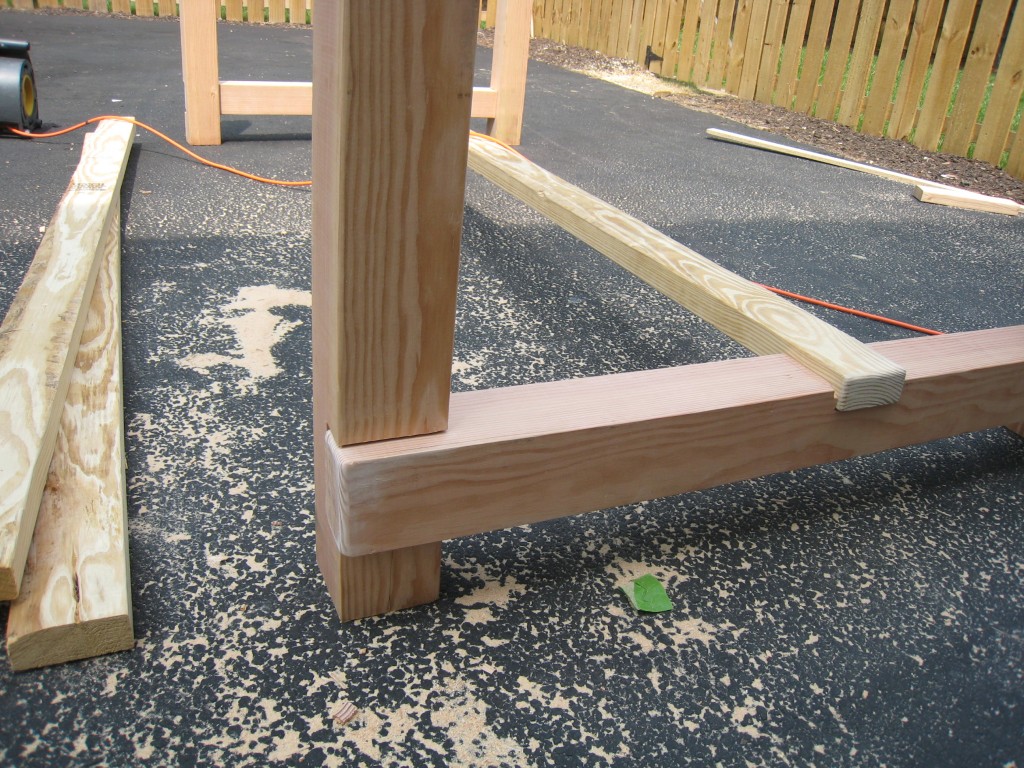 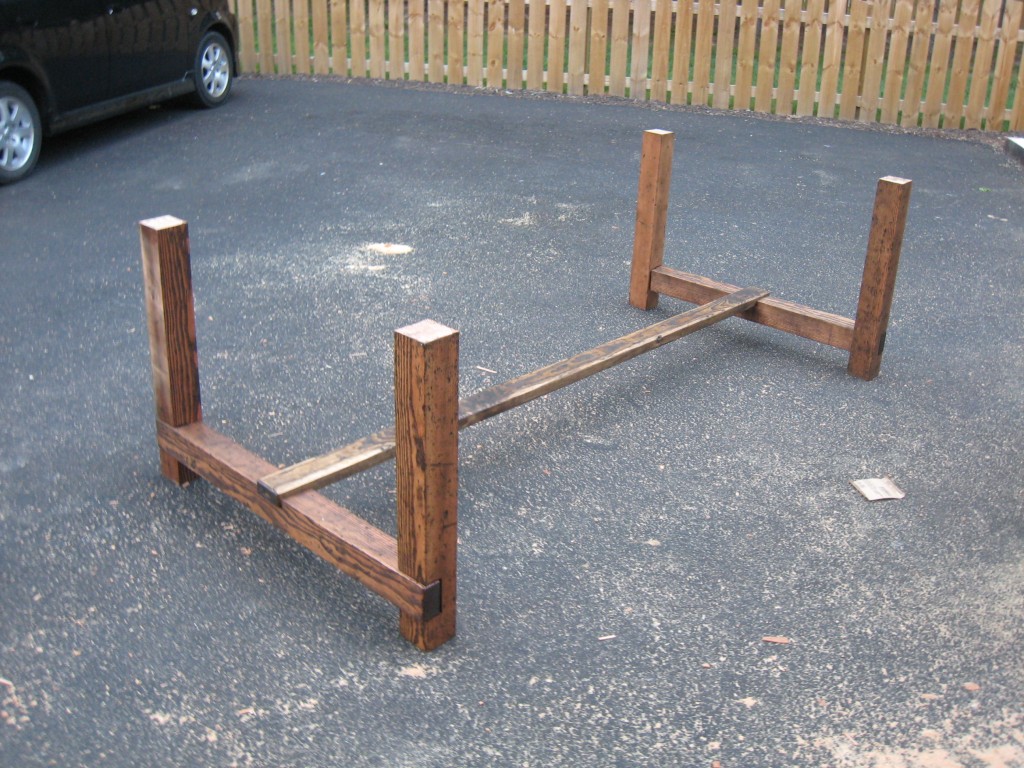 Once I dried fit it together, I went back and tweaked it some more to make it more subtle. I also then began the process of distressing it all which included banging the legs on the concrete at the end of my driveway, hammering chains against the wood, hammering the wood, scratching with screws, etc. I also put a first coat of stain on things. Once the base was done, I focused on the tabletop. I used my Kreg jig for the first time to drill all the pocket holes on the underside of the 2x12’s. I spaced them out about every 12”. My plan was to construct the entire tabletop outside and then after I put together the base in the dining room, that I would move the massively heavy tabletop onto the base. The planks were real heavy but one-by-one, I would place them together, clamp them down, clamp them together, and then screw in all the pocket screws. This was my first time clamping things together….and I love it. I don’t think I’ll build anything else again without clamping.

Anyways, I didn’t take any pictures of that step or some of the next couple steps. To complete the base, I needed to cut, distress, stain, and use the Kreg jig to drill holes, for the side aprons and end aprons. I moved all of these pieces into the empty dining room and constructed the base. I also added some 2×4 support beams about every 24”. Once I had all that together, we hoisted the entire tabletop onto it. Here’s what that looked like; 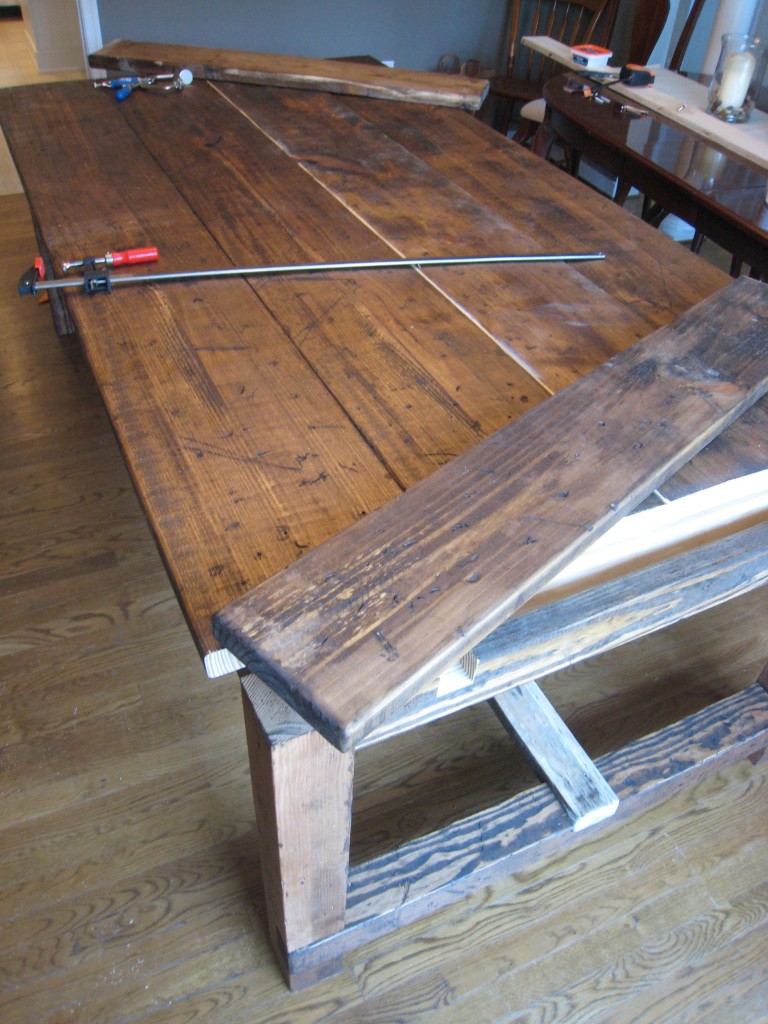 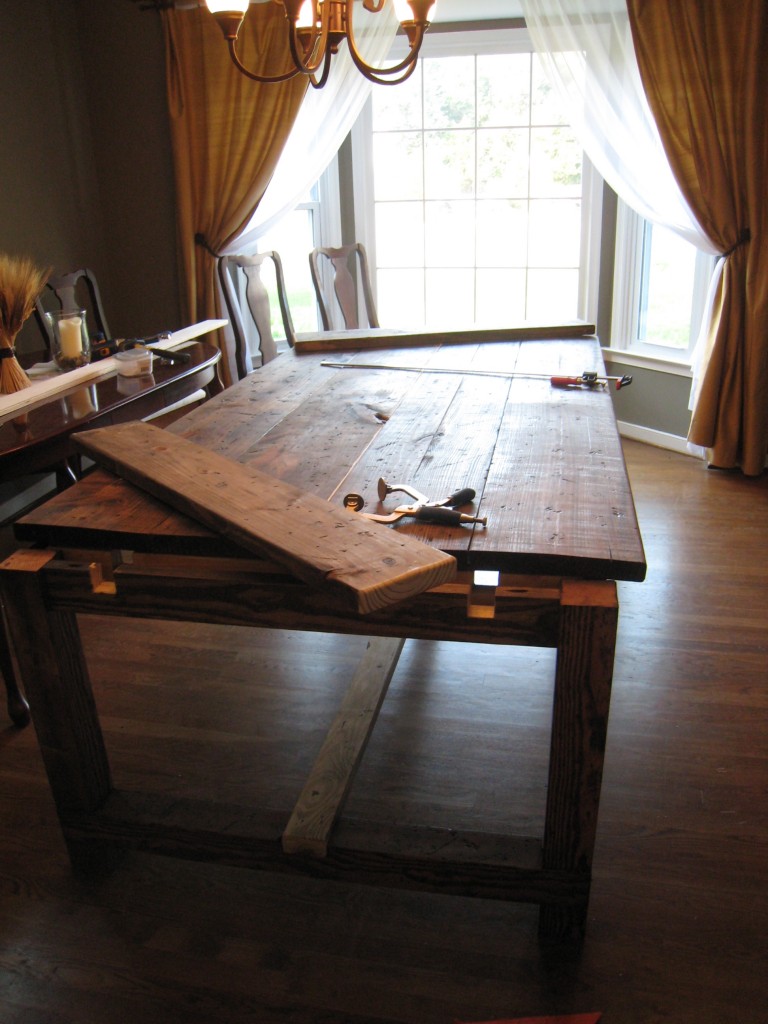 I then attached the bread boards using all my clamps. Once that was done, I secured it to the base from the underneath. I countersinked some screws through the 2×4 supports and then also had some pocket holes through the 4x4’s. Once I had it all together, I decided to sand down some of the areas that weren’t quite flush. 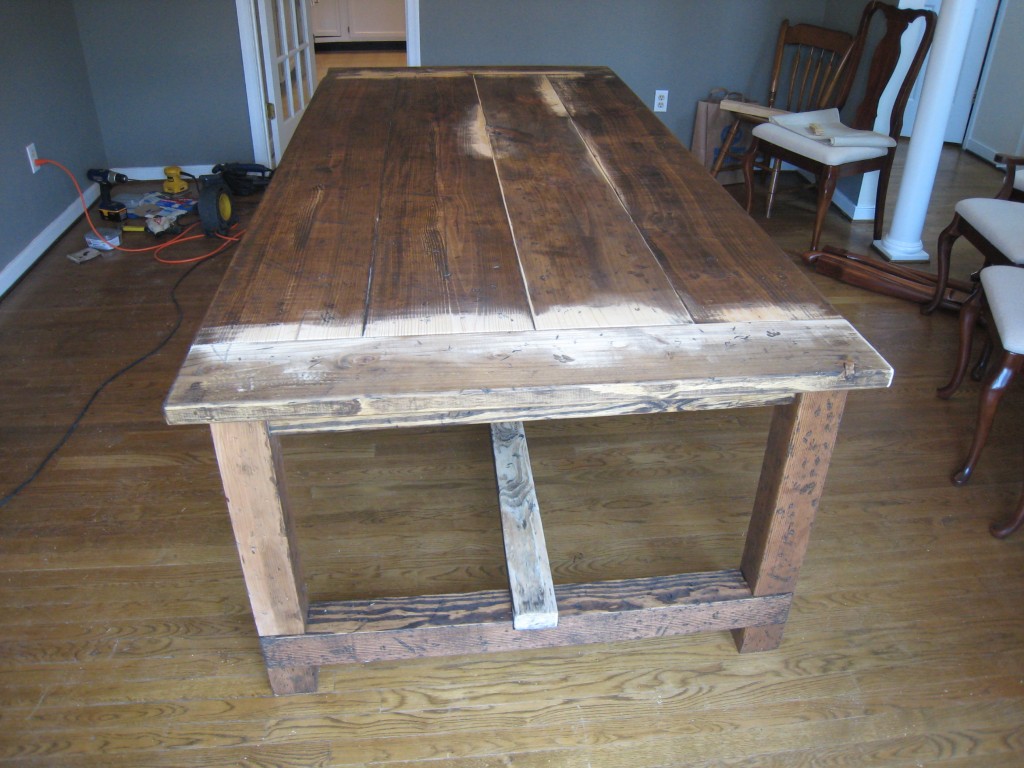 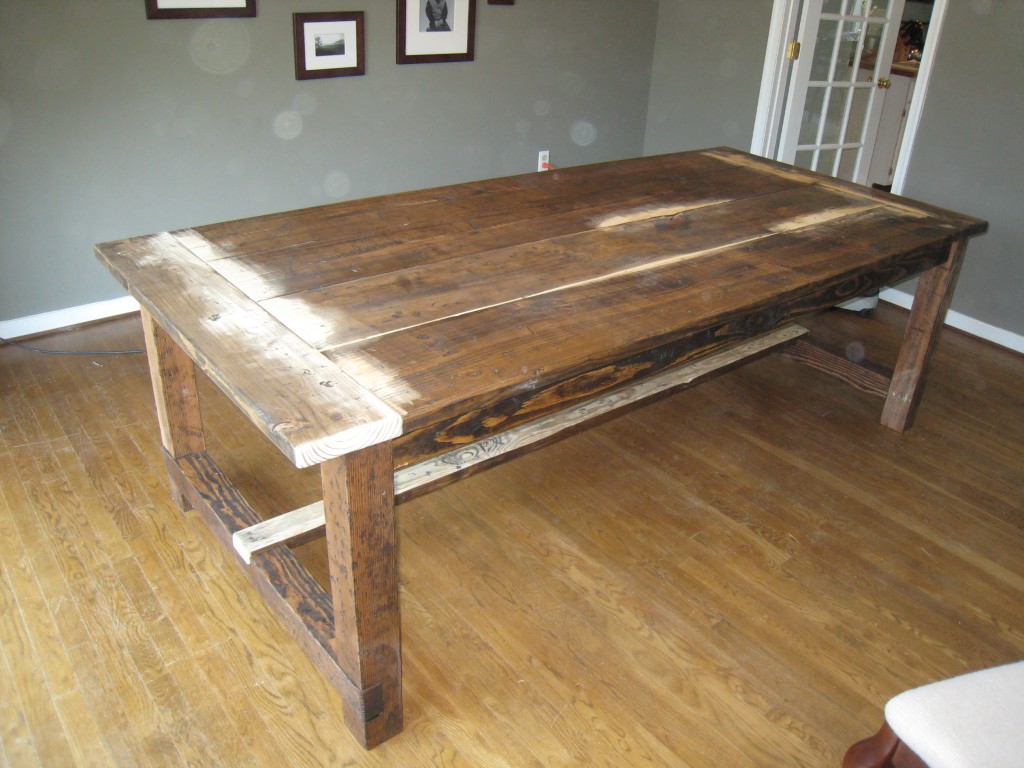 I put another coat of stain on it to finish it off (Dark Walnut). I ended up not liking it and thinking that it was too dark. So I decided to sand the entire tabletop down. 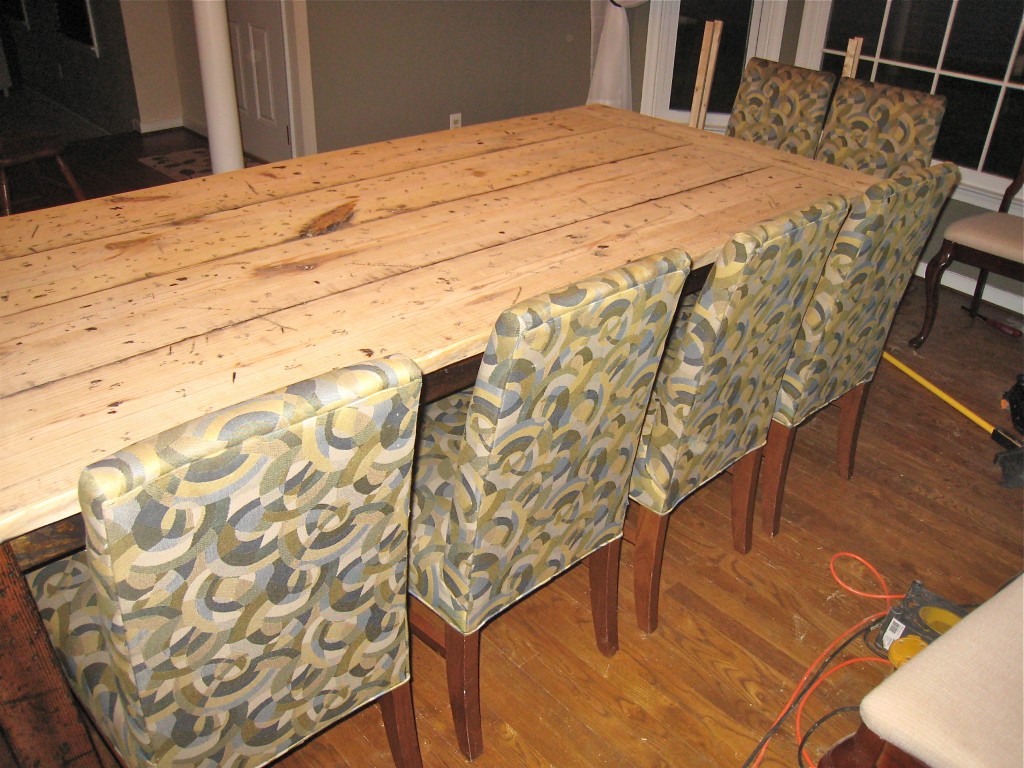 After a test strip with Briwax, Special Walnut, and American Classic……I decided to go with the original Dark Walnut stain. But the good news was that it made the distressing a little more subtle. I also learned that I love this Briwax wood wax. So after a coat of stain, I used the Briwax (Light Brown) to finish off the table top. The awesome thing about the Briwax is that it makes the table real smooth and gives it a nice consistent shine. 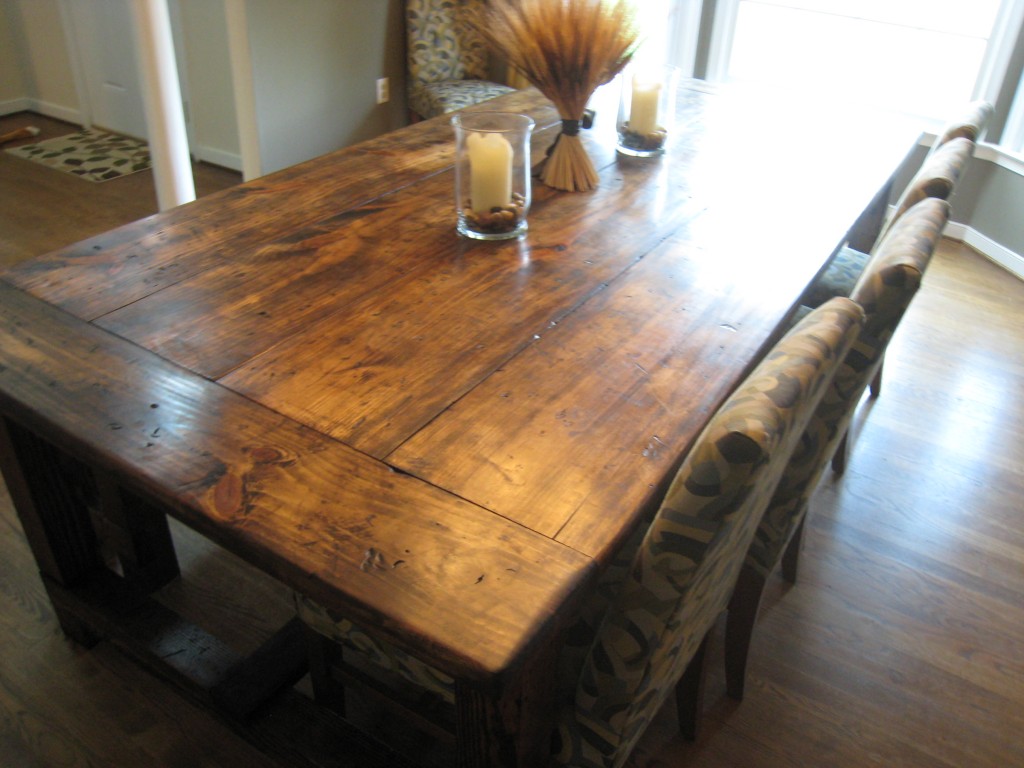 I did the same finish on the 15” extensions. BTW, those were just two 2x8’s screwed together with the Kreg Jig. I then attached some 2×2 strips on the underneath to slip into the table. I notched out the base 1.5”x1.5” to allow for a nice tight fitment. I used my router to get it to the right depth. I also used the router for rounded off edges on everything. Here’s the table with the extensions (total table lenth with extensions is 126”!!!!!) 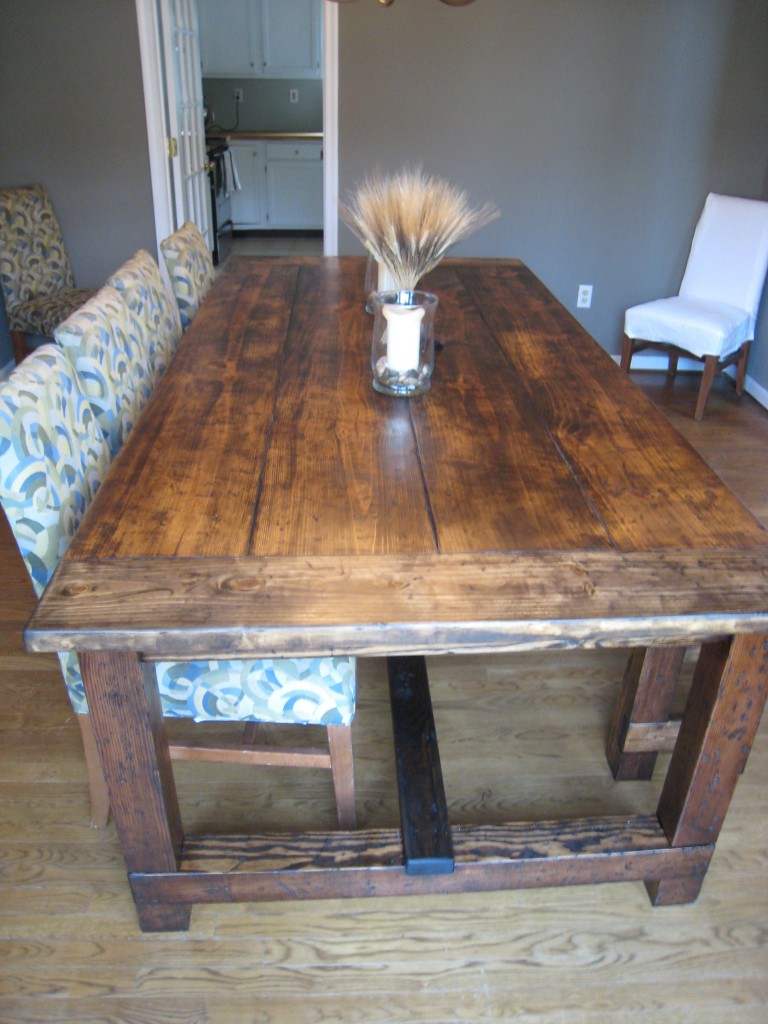 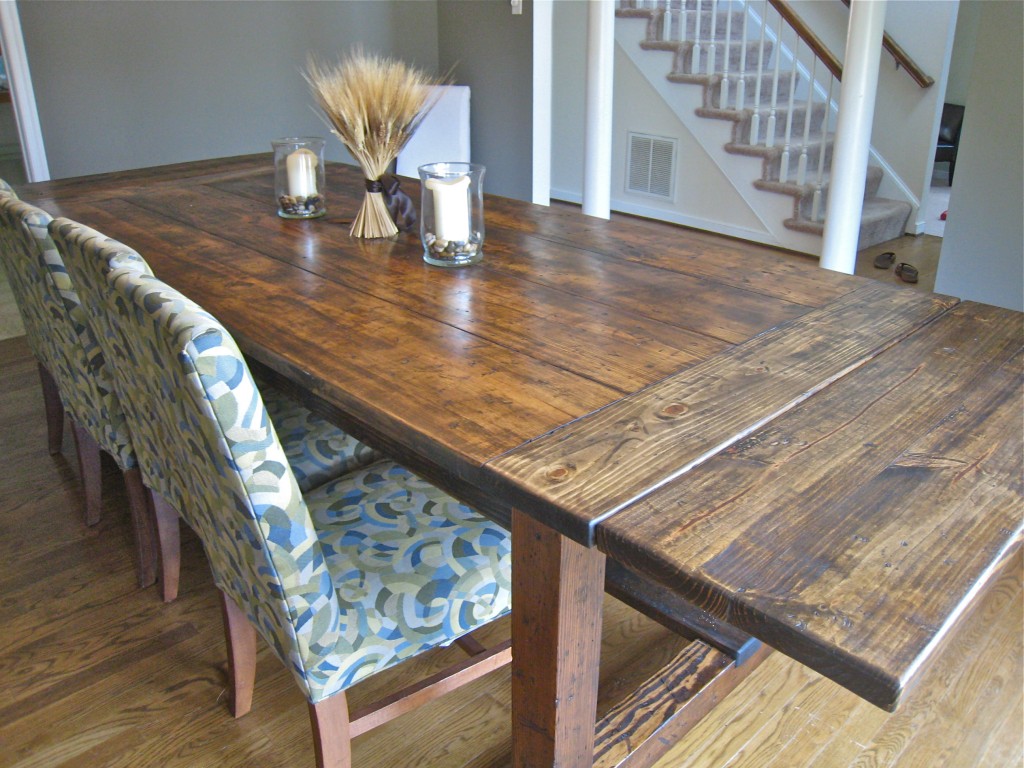 Here’s how the extensions work; 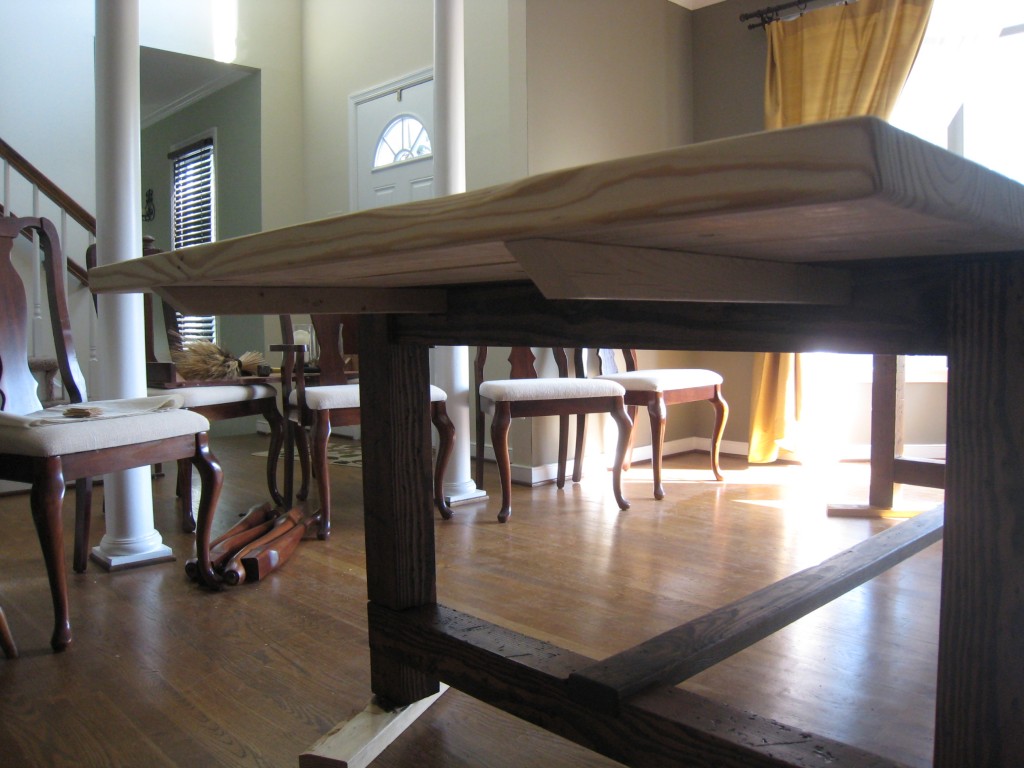 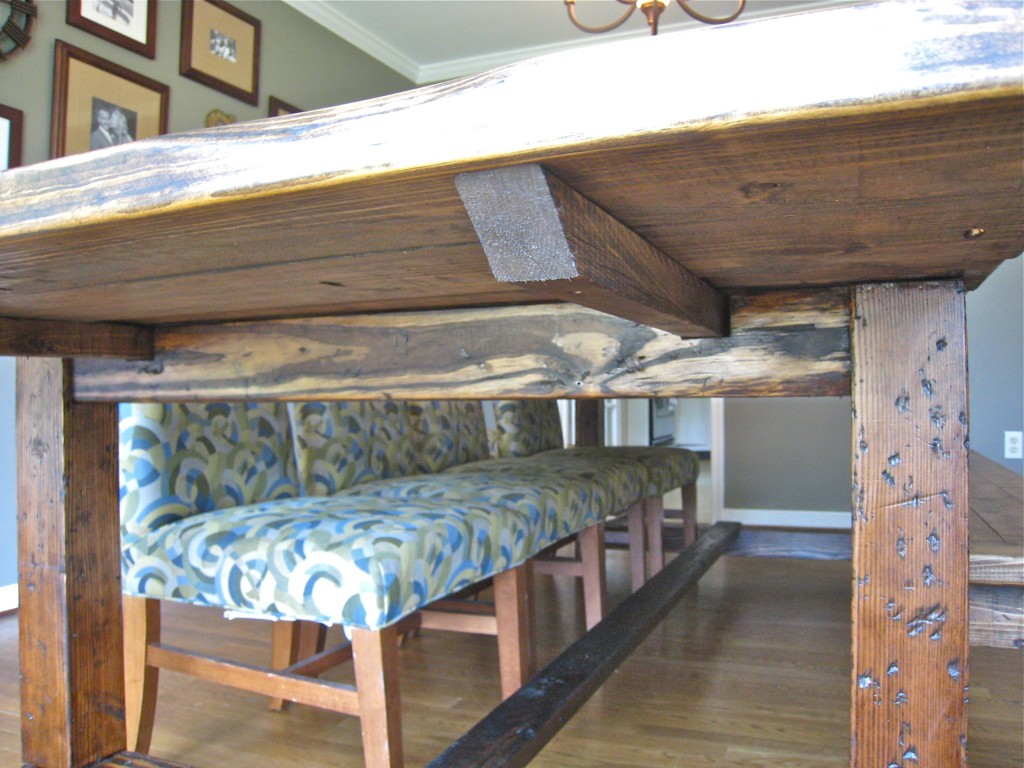 Here’s some other close-ups; 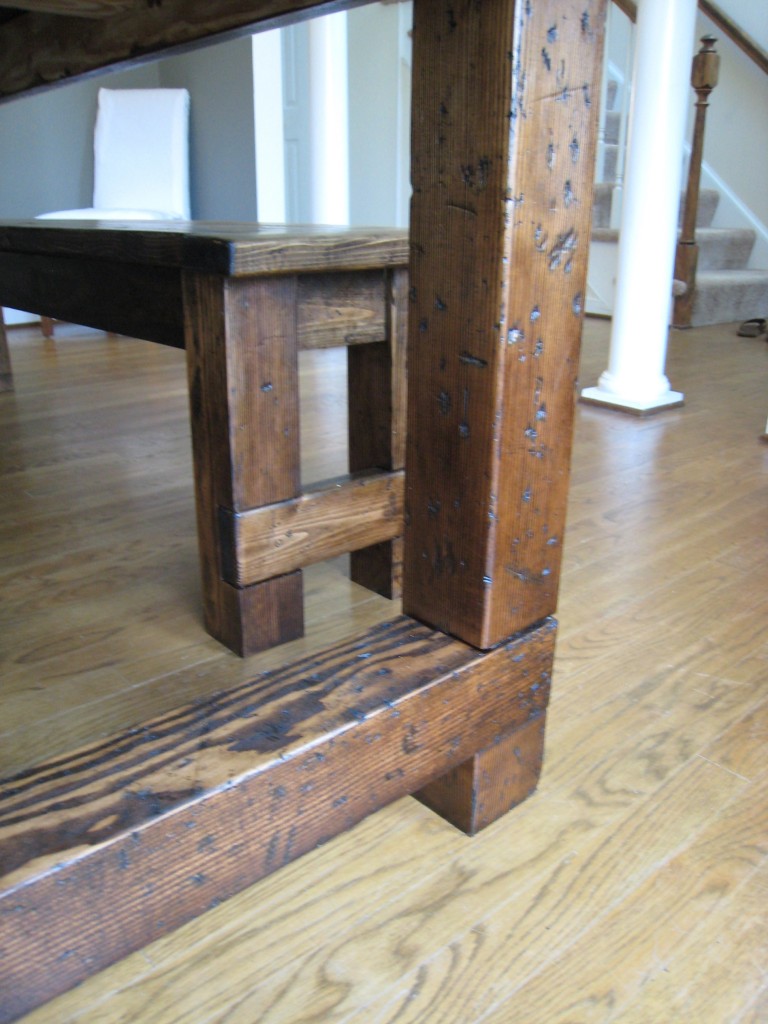 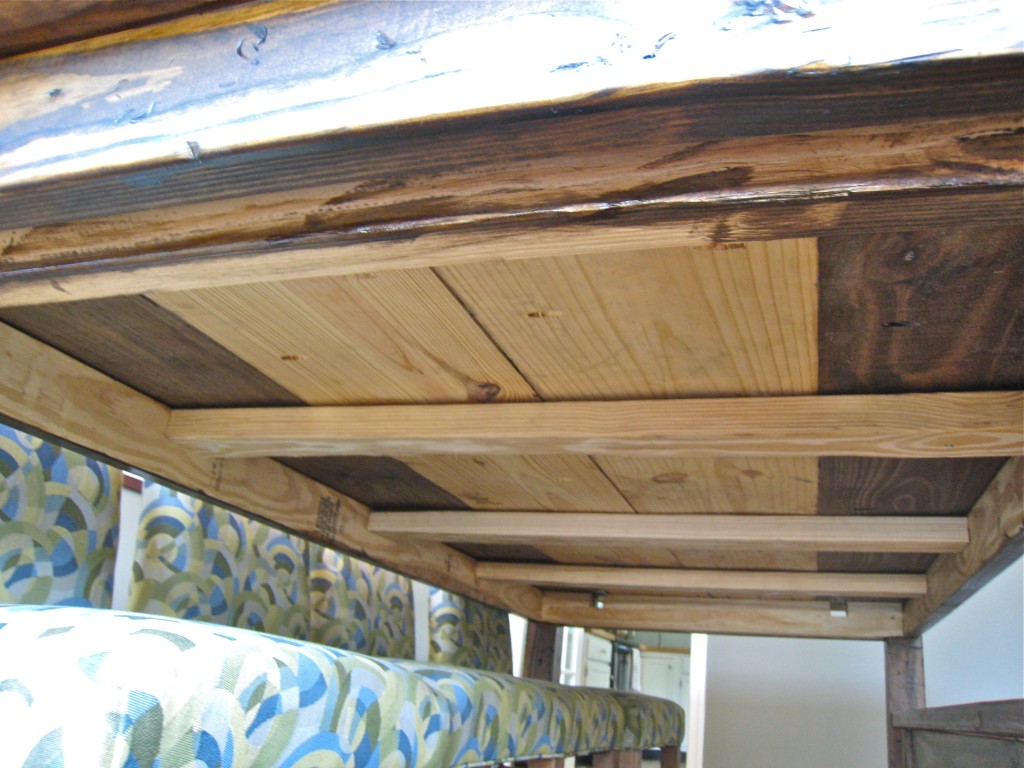 And here’s some of my favorite spots. I think these add some awesome character to the table; 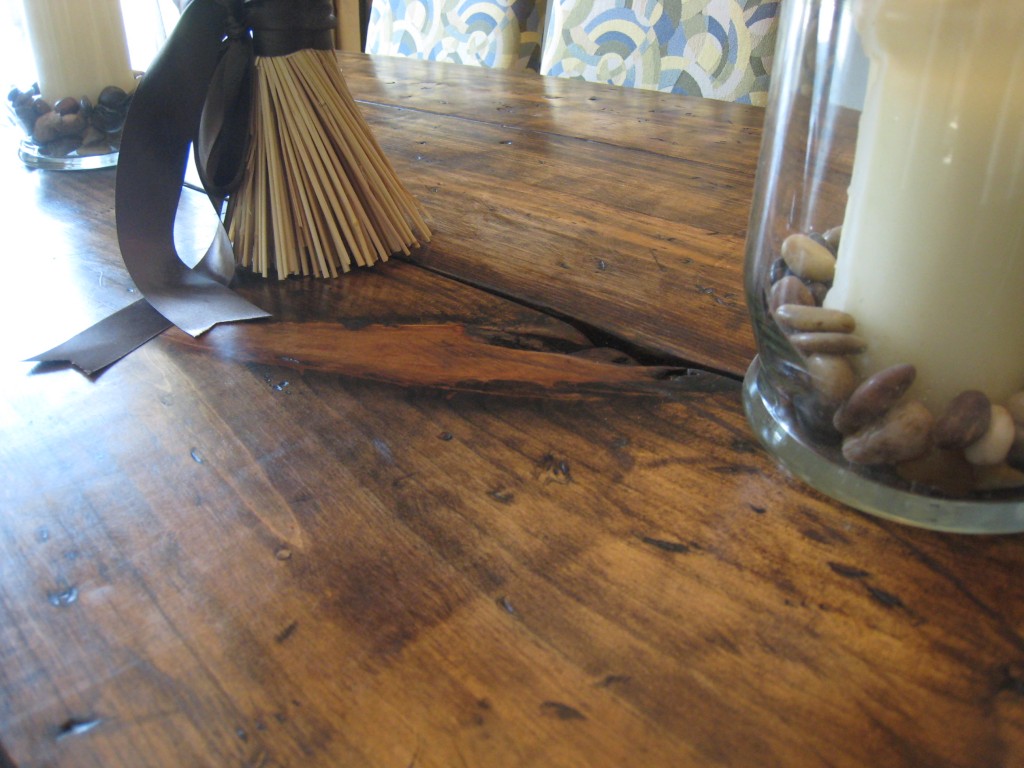 HERE’S SOME NEW PICTURES OF THE TABLE ALONG WITH OUR NEW SLIPCOVERED PARSON CHAIRS, SEEN HERE, A NEW AREA RUG, AND A NEW HURRICANE. 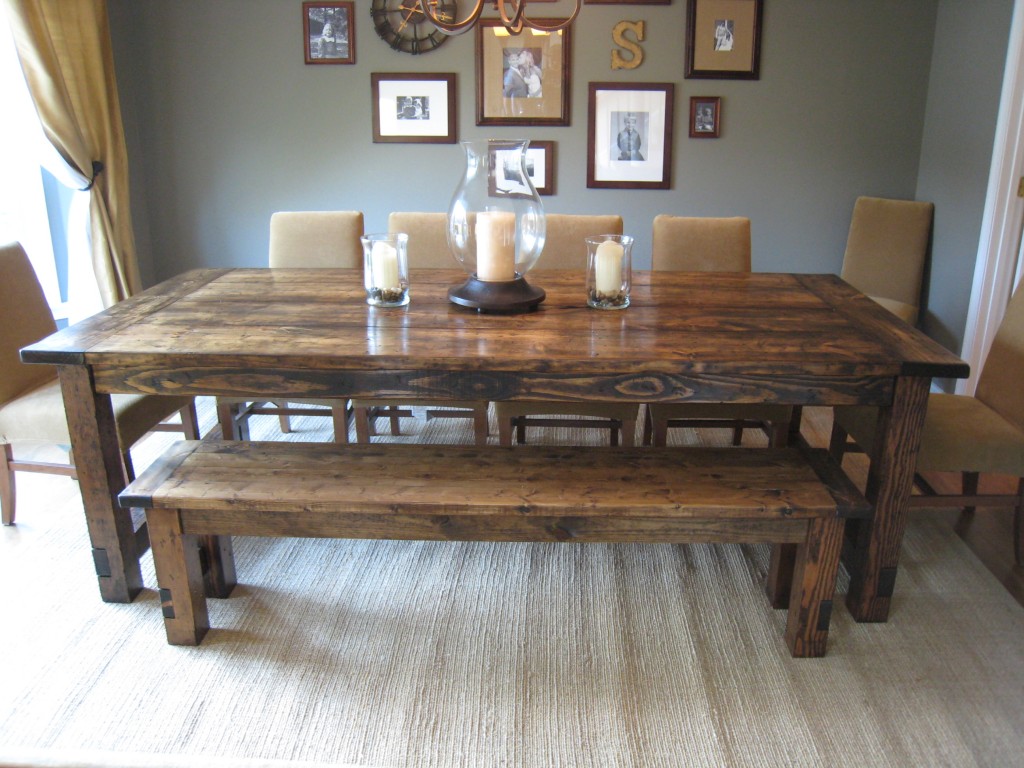 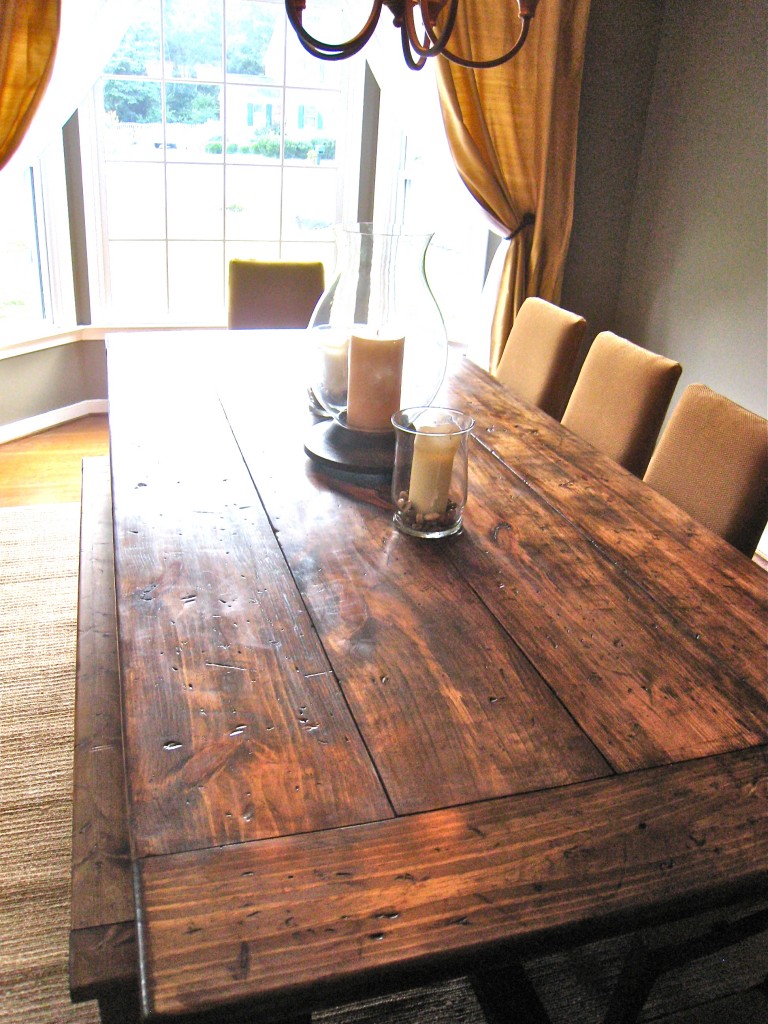 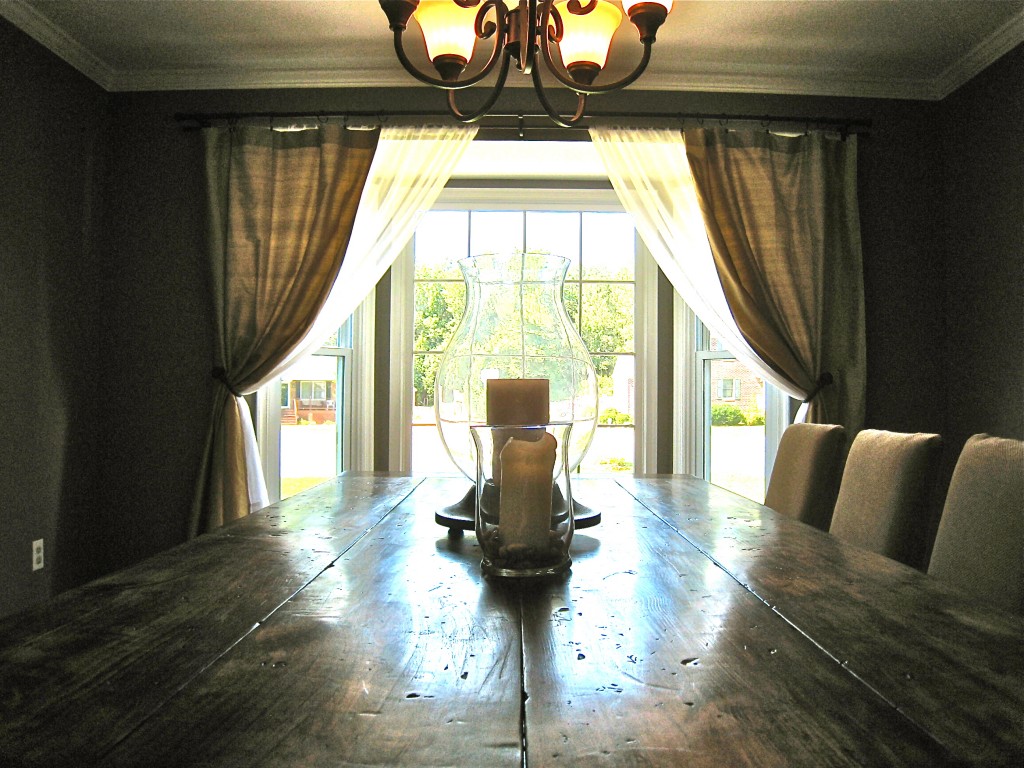 Blue Prints can be found here.