If imitation is the highest form of flattery, then the Bowers from http://www.bowerpowerblog.com/ should consider this the best compliment ever! After the initial shock of finding out that we were having a boy, Ellie was super excited about their little man’s nursery. Check out their reveal here and you get a good sense of what our nursery is going to look like once it’s finished. So we essentially went out to completely copy it! We duplicated a ton of their little touches and you’ll see those on the final reveal but the most obvious and noteable is creating the pallet wall.

It was quite the project and I need to start off by thanking all of the folks that helped us knock this entire project out in ONE day! Thank you!

I started by collecting pallets. Craigslist has a bunch of listings in their free section and it’s a matter of constantly checking. I found a good amount of untreated pallets that we’re in “newish” condition, so I mixed up several different shades of stain to give the wood some different tones. I also left them all outside for about a month to add to the “weathered” look. About a week before the construction of the wall, I moved all the pallets inside so that they would dry out.

The wall was prepped with 1/2″ OSB plywood screwed into the studs of the wall. This is to protect the drywall from having a million nail holes in it as well as give the pallets something solid to be nailed into.

Here’s the room before;

The day of construction, I invited a ton of friends over to help and divided out a bunch of the tasks. The overall flow of the process was;

Once all the wood was prepped and ready to install we started to attach it to the wall. I used 1″ finishing nails and started at the top corner. I simply followed the ceiling line and nailed it into place. I would switch from going right to left and then left to right and staggered my cuts/widths/colors as best as I could. 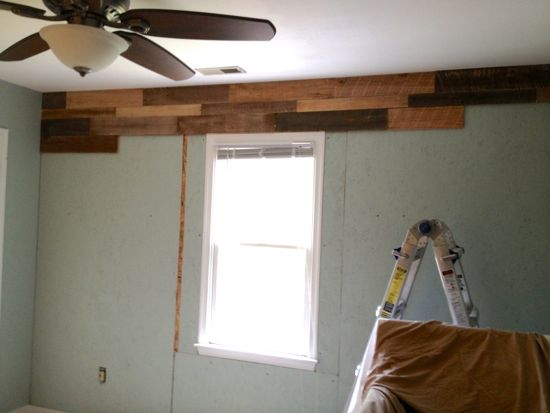 My plan for above the window was to rip down the entire row to the width needed so that it would be a nice straight line. We actually lucked out and it was exactly 5″. But I did use this rule of thumb throughout the project and needed to rip down the rows for the bottom of the window, the row above the outlets, and the final row above the baseboard. One little detail that I did around the window was I took my router to all the edges that would butt up to the window…and rounded off the edges. Also, around the window, I would start at the window and work my way out to the walls.Towards the bottom part of the window, I needed to custom notch out the end pieces. I opted to extend the outlets out from the wall and so I made sure to end those rows correctly.

My original plan was to go as far down to the carpet as I could and then install some new baseboard coming out….but….I just stopped right where the baseboard ends. I figured once the changing table, crib, and ottoman are against the wall that it’ll hardly be noticeable…..and if I want to change it later, I can still add the baseboard.

Because we had so many people helping with disassembling of pallets, sanding, and installing….the wall only took ONE day! As a fun momento, I had our friends sign the wall and write little messages to Tucker.

Once the wall was finished, I brushed on 3 coats of water-based polyurethane in satin. This definitely darkened the wood but gives us some peace of mind that it is fully sealed and that Tucker is protected. When you run your hand across the wood it now feels great.

So here’s the wall….some of the iphone’s panorama pictures look a little funny but hopefully it gives you a good sense of the room. The pallet wall totally changes the entire “feel” of his little man cave. Keep checking back and we’ll be posting some more details as the room continues to take shape. 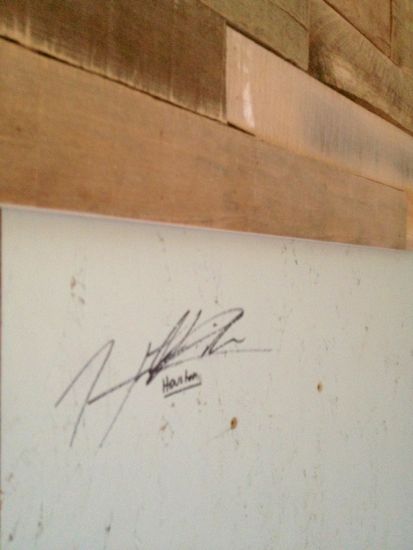 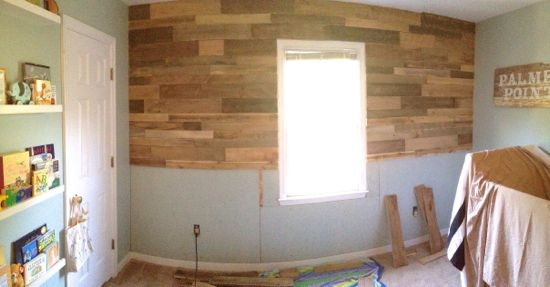 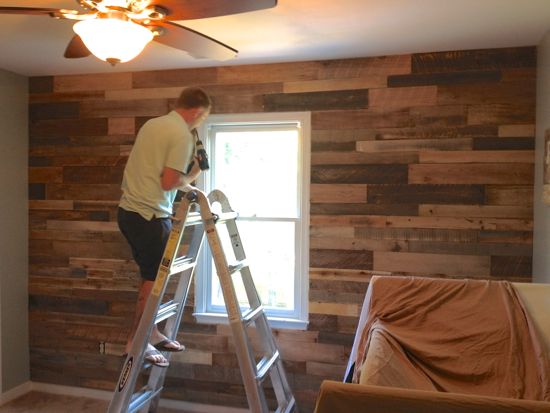 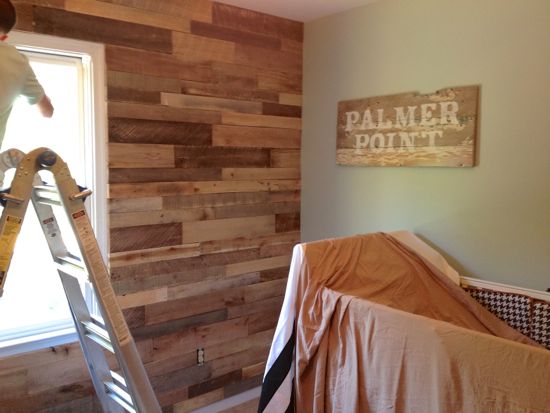 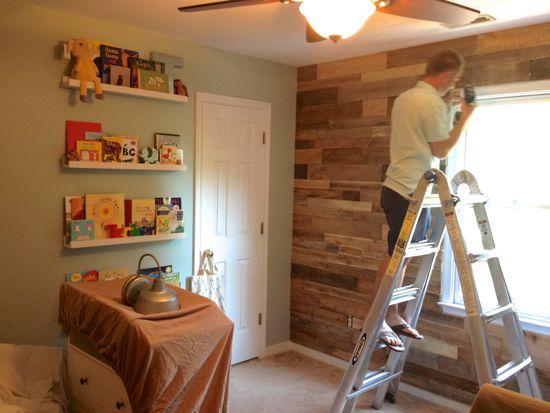 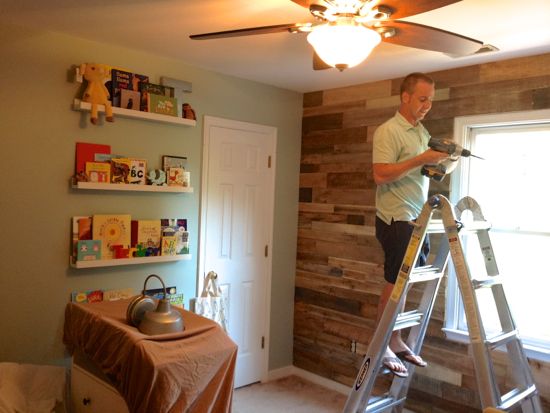 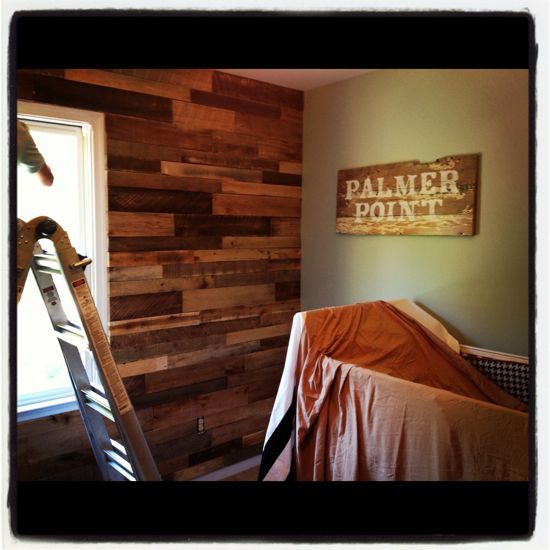