This is an older post that I’ve recently updated;

So when I was a bachelor, living in an apartment, I remember seeing some pretty cool book shelves at Target. The only problem was that they cost $89. There was no way that I was going to pay that much for one, because I knew that I could build 3 for that same price. So that’s exactly what I did.

These were ok for a little while. But the reality is that I built this without really knowing what I was doing. I had Home Depot cut all the wood for me (they weren’t the same sizes), I used metal brackets to hold the shelves (not very strong), I didn’t sand it down before painting it (I didn’t own a sander yet), and I painted them black (eh). Two of these eventually were retired to the attic but I knew that I wanted to do something with them and to re-use the wood somehow. While at Home Goods, I found just the book shelf that I wanted to replicate.

So….I took apart my old bookshelves and ran them through my planner to sand off the black as well as to get them nice and smooth. Additionally, the 1x4”s, 1x6”s, 1x8”s, 1x10”s, and 1x12”s had begun to cup so the planner got them back to level.

I took the 2x2”s and began to make some arbitrary measurements and ran them through the table saw to create notches for the shelves to slide right into. I also mitered the ends so that it would sit on an angle.

Long story short…..I got all the way through til just about the last step, made a measurement from the wrong end, and ruined my project. So the wood just sat in the corner until a friend of ours asked if I could help them build a little book shelf. Looking around my garage, I though of what I could do and what I could use. I decided to use 2 out of the 4 2x2”s that I had cut to create a leaning leaning bookshelf.

Since the 2x2”s were already notched out, I just needed to make sure that my shelves fit. I also wanted it to lean onto the wall differently then what I did before so I just added about 5” of a 2x2” to the top. Then it was just a matter of countersinking some screws, using wood glue, and lots of clamps.

After all that was done, I painted it white with some off-the-shelf Valspar. Here’s the new look on an old concept. 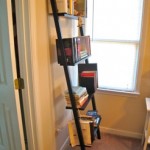 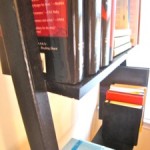 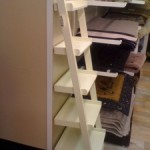 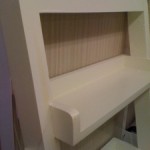 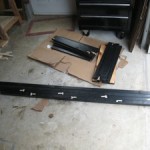 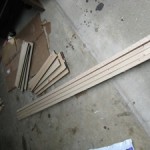 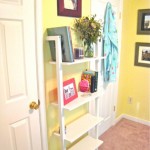 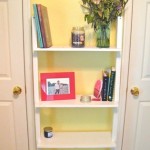 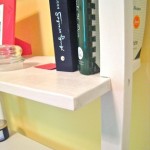 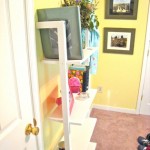 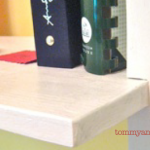 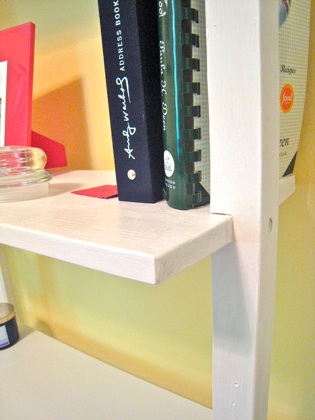 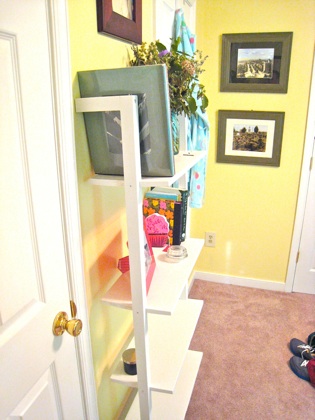 Which do you like best…..the old black one? The one from Home Goods? Or the new white one?